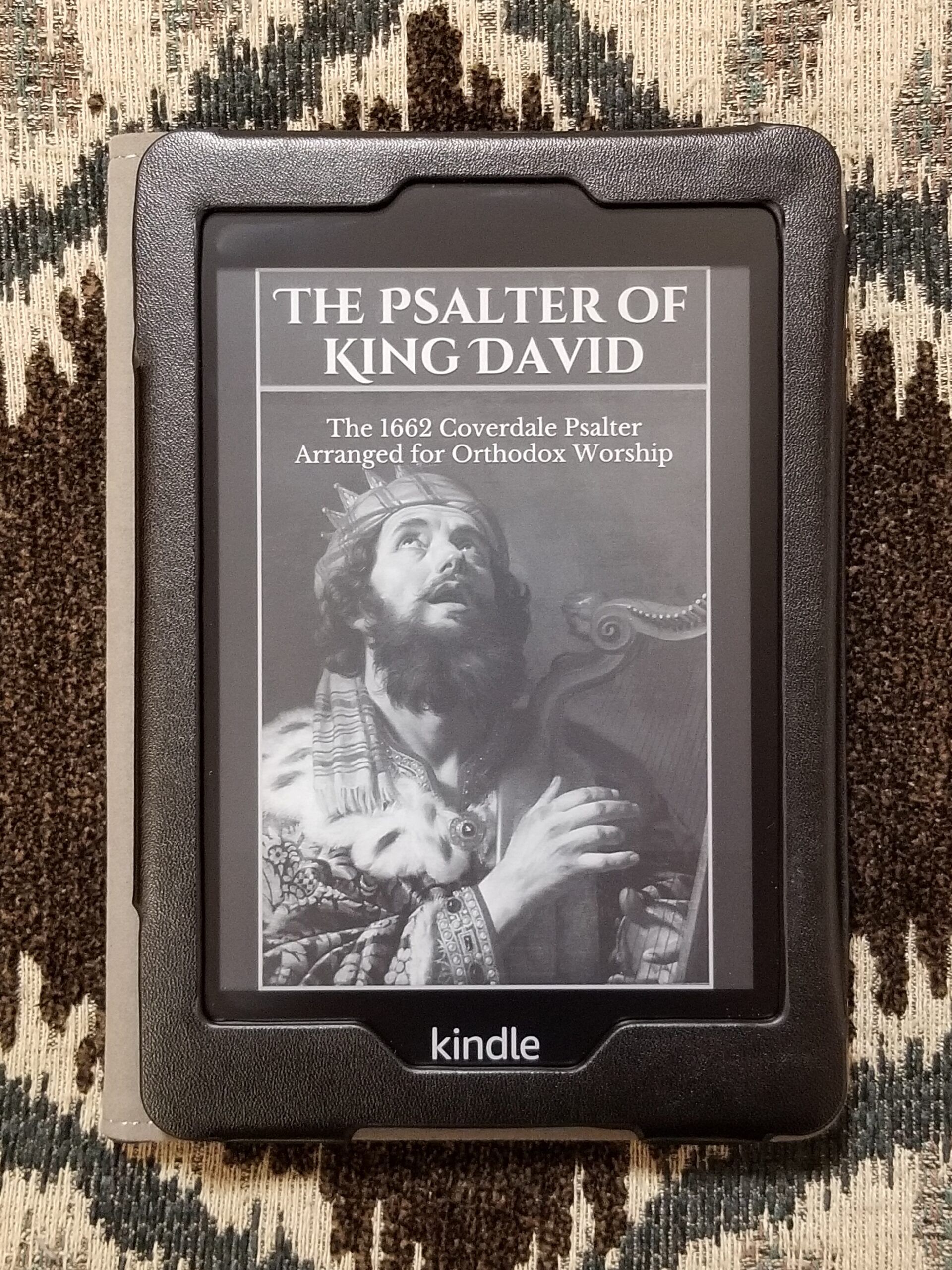 I’m the proprietor of Buky Press, a nonexistent publishing house dedicated to crafting well-thought-out liturgical books optimized for the e-reading experience. Today, I’d like to share with you my first completed e-book, now available on Amazon’s Kindle Store (and coming soon to other e-book sellers): The Psalter of King David: The 1662 Coverdale Psalter Arranged for Orthodox Worship.

I initially began this project because I was deeply dissatisfied with the existing psalters on the market. The first psalter I ever prayed consistently was the Coverdale psalter found in the American 1928 Book of Common Prayer. I was given a prayer book by a priest-friend, who showed me how to pray Matins and Evensong. The BCP’s language immediately resonated with me; I think that the majestic prose ‘clicked’ right away because I’d been deeply immersed in British literature from childhood through college. I recognized many phrases here and there, and found the psalms and canticles especially memorable: “O Lord, now lettest thou thy servant depart in peace!”

I’d never been interested in the Liturgy of the Hours or the traditional Roman offices due to their perceived complexity and unfamiliar (to me) language, but quickly fell into a regular rhythm of prayer using the straightforward BCP offices. For various reasons, I eventually switched to praying from the 1662 BCP—primarily because the 1662’s original daily office lectionary is simpler and much more comprehensive than later revisions, but also in part because virtually all the great English choral texts are taken from this version.

I thought that with the 1662 BCP offices I’d found the offices I’d pray for the rest of my life—and perhaps that’s still true. But somewhere in the last few years I was introduced to the common Eastern way of praying the full psalter weekly, and decided to give it a shot. It’s really a wonderful prayer rule, and even easier to pray consistently than the BCP (there’s no flipping to and from various sections at all, you simply read a set number of psalms at different times, bookended by customary prayers). At first, I used a beautiful little psalter published by Holy Transfiguration Monastery, which is a very interesting and unique translation. However, I couldn’t get used to it (having been utterly spoiled by the Coverdale version), so I ordered a copy of David James’ “Psalter for Prayer”. This is an Orthodox revision of the Coverdale psalter, with the translation corrected by comparing it to the Septuagint. Unfortunately, the sequel wasn’t anywhere near as good as the original, so after stumbling over so many unnecessary “improvements” in the text I quickly returned it. I tried a few other options, including the USCCB’s recently-published Abbey Psalms & Canticles (which is really quite good for a modern translation, though I found it rather brusque and unmemorable), and finally resorted to penciling the kathismata and stases into my BCP’s psalter and calling it good. At this point, I can’t recall what exactly triggered the idea to create an e-book psalter—I was probably thinking how it’d be nice to have the real Coverdale psalter in a standalone edition, and then looked at my Kindle and had an epiphany. (Or something like that, anyway!)

The name I’ve chosen for this book might seem a little odd, but it makes sense: The Slavonic psalter I took some of the prayers from is called Psaltir’ tsarya Davida (Ѱалтирь царя Давида), or The Psalter of King David, so I chose to borrow that title—it’s striking, and somewhat unusual in English. And the subtitle, The 1662 Coverdale Psalter Arranged for Orthodox Worship, is intended to show immediately the translation (Coverdale) and its arrangement (the Eastern divisions into kathismata and stases, rather than the usual Anglican 30-day divisions).

Since this is Catholic Bible Talk, I’m sure most readers have two questions in mind: What’s the Coverdale psalter? Is this psalter approved for use by Catholics?

To answer the first question, the Coverdale psalter is the official, standard psalter used by the Church of England and most (if not all) of its daughter Anglican churches. (I’m sure it’s seeing much less use nowadays, as there seems to be a vendetta against archaic pronouns.) Myles Coverdale completed one of the earliest English Bible translations in 1535, and his translation of the Psalms in particular became popular enough to be adopted by the Church of England for use in its services. Somehow the Coverdale version managed to remain part of the Book of Common Prayer even after the publication of the Authorized Version (KJV), which has its own magnificent psalter. In my mind—and I know nearly everyone will have their own opinion here—the Coverdale psalter is far and away the greatest English psalter; and it’s one of the greatest influences on the modern English language (alongside the remainder of the BCP, the KJV, and of course the works of Shakespeare).

That all sounds great, but if it isn’t approved for Catholics, then who cares, right? Fear not: for, behold, I bring you good tidings of great joy, which shall be to all people: The Coverdale psalter is now an official, approved Catholic psalter! In September 2020, Bishop Steven Lopes (of the Personal Ordinariate of the Chair of Saint Peter) gave his imprimatur to the American Ordinariate’s new divine office book. Called Divine Worship: Daily Office (North American Edition), it contains texts for Mattins and Evensong lifted straight from the American 1928 BCP (as well as numerous other Anglican sources), as well as the Coverdale psalter in its entirety. Sometime in the next few months or so, the UK and Australian Ordinariates will publish their official (shared) prayer book as well, which draws primarily from the 1662 BCP. Thanks be to God for Anglicanorum coetibus, which has brought these brilliant treasures of the English language fully into the Catholic fold!

In part 2, I will delve into some of the nitty-gritty details about what goes into creating a decent e-book, as well as a blurb about why this book may be valuable ecumenically, since the Coverdale psalter is now officially used by Anglicans, Catholics and Orthodox.