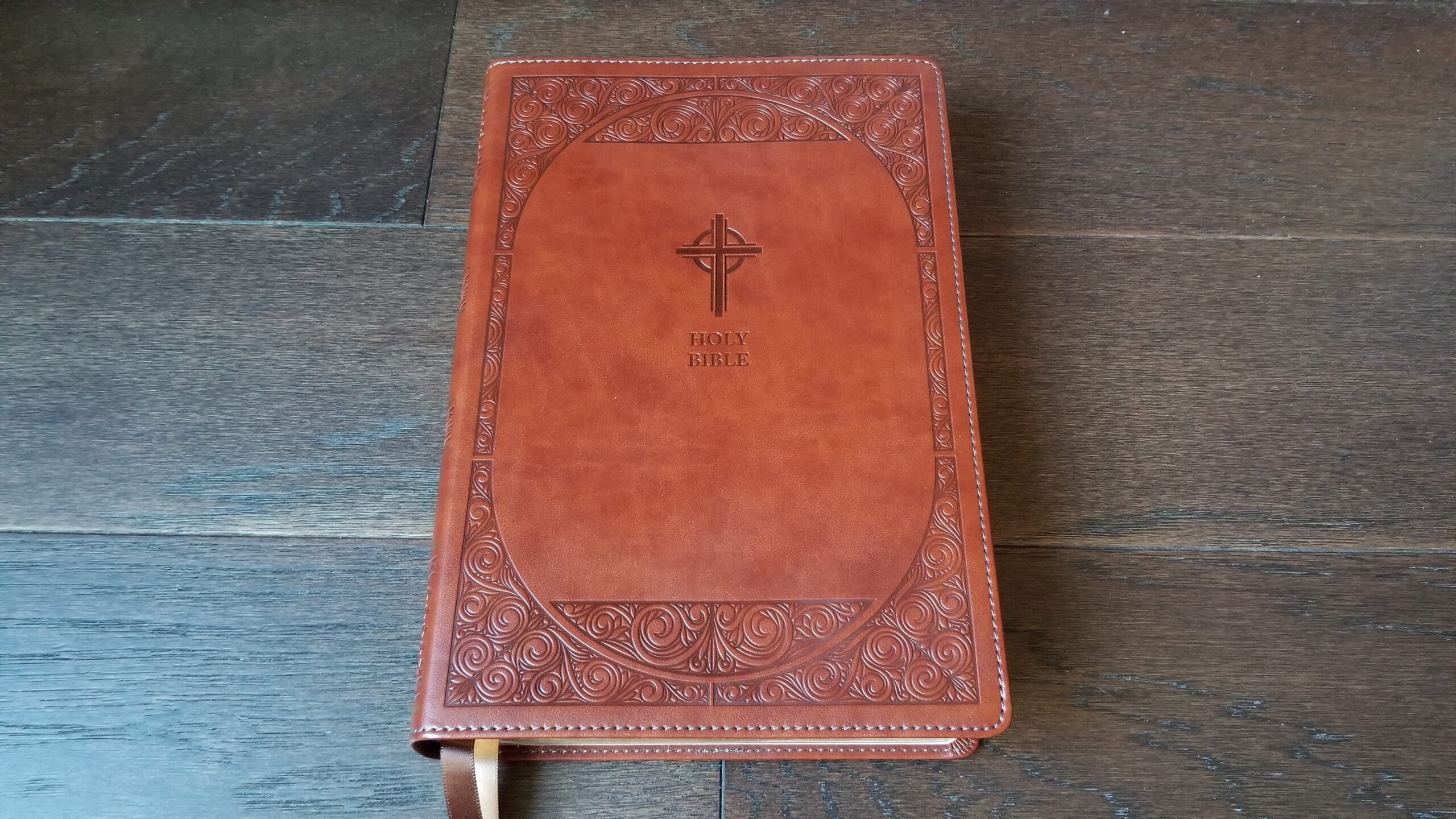 Catholic Bible Press has now released their large print New American Bible Revised Edition (NABRE). It is available in both black and brown leathersoft (imitation leather). I previewed the expected features back in April in this post, and I’ve now received my long-awaited pre-order for the brown version.

This Bible lives up to the quality that I appreciated in the NRSV-CE Personal Edition, which Catholic Bible Press released earlier this year. The leathersoft cover features embossed patterns and artwork. It is soft and flexible with stitched edges and gold printing on the spine. The paper is bright white and reasonably opaque, and the binding is sewn. There are also two 1/2-inch, double-sided ribbons.

As I mentioned in the preview post, this Bible is similar in size to the Oxford large print NABRE, which has been available for several years. Now that I can compare the two side-by-side, I’m surprised at how similar they are. In real-life (which doesn’t always match the product listings!), both bibles are exactly the same length: 9 9/16 inches. The Oxford is a little narrower, measuring 6 3/8 inches wide, compared to 6 11/16 inches for the new edition from Catholic Bible Press. Finally, the Oxford is very slightly thicker, measuring 1 11/16 inches compared to 1 9/16 inches for Catholic Bible Press.

The new offering from Catholic Bible Press (CBP) also uses the same basic layout for the text as the Oxford: all the NABRE footnotes and cross-references are printed at the end of each book. In the Oxford edition, footnotes are denoted by * in the text, while the CBP uses a cross or dagger symbol. In both editions, cross references are denoted by a small lower-case letter.

For the biblical text, CBP developed a custom font called “Catholic Comfort Print.” It is a bold typeface which looks similar to the font in the NRSV-CE Personal Edition from CBP which I reviewed in March. The most distinctive feature of this font is the elongated tails on some letters when they appear at the end of a sentence. Here is a close-up sample with a few of these flourishes:

According to the advertising materials, the size of this font is 11 pts. Oxford lists a font size of 12 for their large print NABRE. Comparing the two side-by-side, the lower-case letters are identical in height between the two editions, but the Oxford font has larger upper-case letters and longer tails on letters such as p, d, t, h, etc. The Oxford font is also not as bold. The most noticeable difference is that Oxford printed their Bible with more generous line spacing, while the CBP edition looks very dense:

Overall, I find both editions roughly equal for ease of reading. The generous line spacing in the Oxford looks nicer from an aesthetic perspective, but I haven’t had any problem with the denser arrangement in the CBP edition. In fact, it’s enjoyable to read, and the bold text is exceptionally clear. The CBP edition is also line-matched, while the Oxford is not. Both editions have a similar amount of ghosting, but the line-matching, bold print, and bright white paper in the CBP edition make the ghosting less noticeable or bothersome. In some types of lighting, the Oxford has more ghosting than I’d ideally like, but overall, it is very readable.

The same observations about the fonts apply to the footnotes. Both editions use a smaller font size for the notes, but once again, the lower case letters are approximately the same height, while the Oxford features more line spacing and taller upper-case letters.

Overall, this is a nicely-done new NABRE from Catholic Bible Press. I’m surprised that it is so similar to the Oxford edition. I didn’t expect endnotes for each book, rather than footnotes at the bottom of each page. I continue to have mixed feelings about that layout. On one hand, it is nice to be able to read the text without the constant distraction of referring to notes at the bottom of the page. When the notes are at the back of the book, it is easier to resist checking a note whenever I see the footnote symbol in the text. On the other hand, it is more difficult to quickly find a random chapter-and-verse when there are so many note pages interspersed between the biblical books. I’m sure this would become second-nature to anyone who uses this Bible regularly, but it is a little disorienting as someone who is used to seeing the book chapter and verse printed at the top of every single page in a Bible.

Looking at the bigger picture, this is a well-constructed Bible with line-matching, a sewn binding, good paper, an excellent imitation leather cover, and two high-quality ribbon markers. It is an excellent alternative to the Oxford at a similar price (the Oxford is currently available on Amazon for $42.49, and the CBP is available on ChristianBook for $39.99).