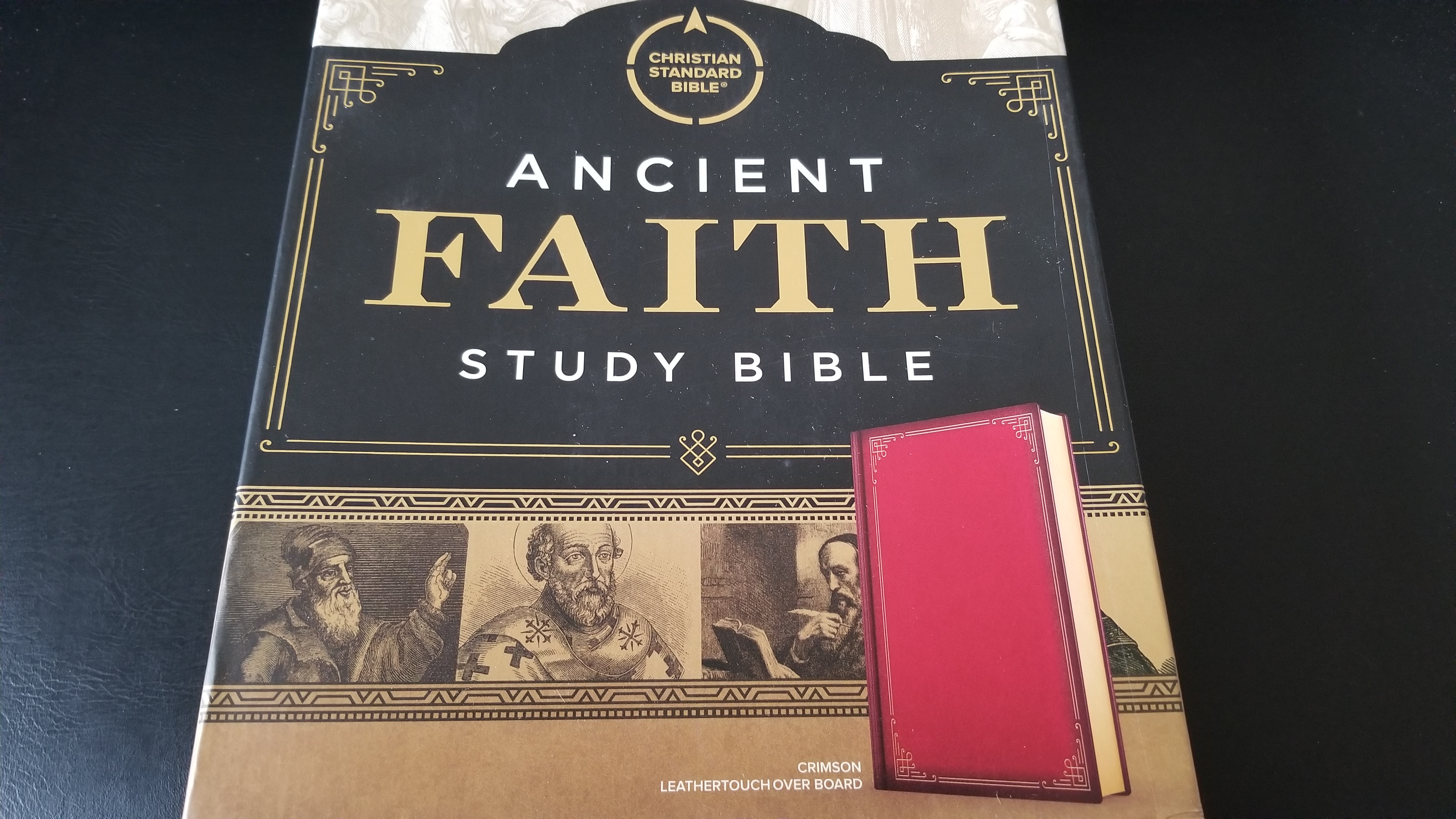 In part 1, I discussed the study notes in the Ancient Faith Study Bible, which are selected from the the Ancient Christian Commentary on Scripture by InterVarsity Press. All of the notes are excerpts from the early church fathers, and the amount of commentary is very generous. In this second part, I’ll focus on the Christian Standard Bible (CSB) translation.

After reading through the Gospel of John, I have mixed feelings on the CSB. As I mentioned in my first look at this bible, the official website for the CSB describes its translation philosophy as “Optimal Equivalence,” which is defined in the following two principles: (1) to leave no aspect of the original language text unaccounted for in translation, and (2) to render the text using natural English that is as easily comprehended as possible.

I saw these principles in action as I read through the Gospel of John. In some prominent places, the translation opts for a very literal rendering of the text. In the famous text of John 3:16, the translation reads as follows:

For God loved the world in this way: He gave his one and only Son, so that everyone who believes in him will not perish but have eternal life.

Based on my prior reading, this appears to be the correct sense of the Greek in this verse. The King James Version renders this verse as “For God so loved the world, that he gave his only begotten Son…” Modern English speakers generally read the words “so loved the world” to mean the same thing as “loved the world so much.” The CSB clarifies that the meaning is actually “loved the world in this way.” It’s a minor difference, but I appreciate the translation’s preference for accuracy in such a famous verse.

What does that have to do with you and me, woman?

Many other translations opt for something similar to the NABRE, which reads, “Woman, how does your concern affect me?” Dr. Edward Sri often cites a literal rendering very similar to the CSB when explaining this verse in his lectures on Mary.

The Father who sent me has himself testified about me. You have not heard his voice at any time, and you haven’t seen his form. You don’t have his word residing in you, because you don’t believe the one he sent. You pore over the Scriptures because you think you have eternal life in them, and yet they testify about me. But you are not willing to come to me so that you may have life.

I do not accept glory from people, but I know you — that you have no love for God within you.

In some cases, the CSB’s approach works well. I found myself enjoying sections where the monologues and dialogues sound more natural than the NABRE. On the other hand, there are many instances where the CSB’s attempt to make conversations flow naturally in English devolves into sappy language or overly childish renderings. Here are a few examples:

Therefore the Jews started complaining about him because he said, “I am the bread that came down from heaven.”

“Started complaining” grates on my ear. It sounds too informal. I like the NABRE’s “the Jews murmered about him” much better. Even the NRSV seems better with its translation: “the Jews began to complain.”

You don’t want to go away too, do you?

This is too sappy for my taste. The NABRE says “Do you also want to leave?” and the NRSV reads “Do you also wish to go away?” I prefer both of these.

Then after that, he said to the disciples, “Let’s go to Judea again.”

Here is another rendering that sounds too informal to my ear. It is very similar to the NRSV’s “Let us go to Judea again,” but the contraction makes a major difference in the tone of the sentence.

In the famous “I AM” sayings from the Gospel of John, the CSB chooses “I am he” in all of them except John 8:58:

Jesus said to them, “Truly I tell you, before Abraham was, I am.”

Finally, I noticed that the CSB refers to the Holy Spirit as “he” and “him” in John 14:17, as compared with the NABRE, which uses “it”:

He is the Spirit of truth. The world is unable to receive him because it doesn’t see him or know him. But you do know him, because he remains with you and will be in you.

Overall, this is not my favorite translation, but I can live with it. I appreciate its willingness to follow a literal rendering of the text, even in places where the traditional rendering of the KJV is so well-known and loved. But its attempts to render dialogue in conversational and natural English are not always successful. In some cases I enjoy the translation choices, and I appreciate the natural flow of the language. In others, I think the renderings sound too childish or sappy. The greatest strength of this bible is the commentary from the church fathers. The translation is passable most of the time, and mildly grating in isolated cases.

3 thoughts on “A Few Days with the Ancient Faith Study Bible (CSB): Part 2”