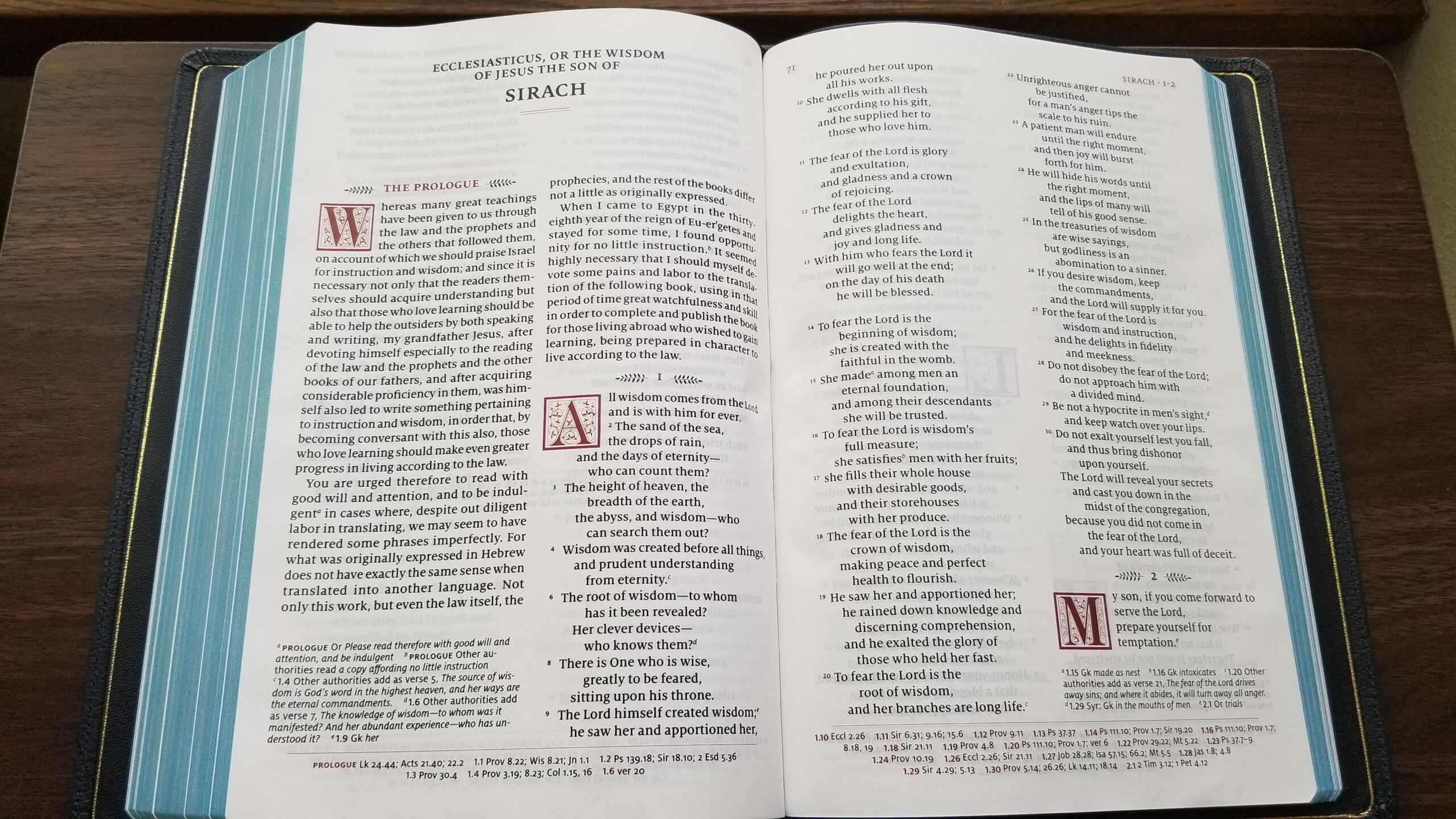 I received my pre-ordered copy of the imperial blue Schuyler Quentel RSV with Apocrypha on Monday after a brief shipping delay with FedEx, and I’ve had a couple of days to look it over, take photos, and compare it to a few other Bibles on my shelf. I have purposely avoided reading or watching other reviews so far, so this review will focus on my own first impressions.

This is the first Schuyler Bible I’ve ever held in my hands. For many years, Schuyler has maintained a top-notch reputation for publishing premium bibles for a protestant audience, and the photos of those editions have always been spectacular. My expectations for this edition were very high. Overall, this Bible lives up to high standards. Also, as expected, this edition uses the 1971 text of the Revised Standard Version which incorporates many of the changes from the 1966 Catholic Edition of the RSV.

This Bible has many of the features that are standard in premium bibles:

My first impression was mild surprise at the size of this edition (in length and width). My copy measures 9 13/16 X 6 11/16 inches. It is thinner than most Bibles in the same size class at approximately 1 1/4 inches. The length and width rival many other large bibles on my shelf. As an example, the Oxford Large Print NABRE is slightly shorter and narrower (but thicker) as shown in the two photos below.

For premium quality, the closest comparison I own is the Cambridge Reference NRSV with Apocrypha in burgundy goatskin which was released in early 2018. The Cambridge edition is almost exactly the same width, but significantly shorter in length. The goatskin cover on the Cambridge edition is much more prominent and coarser in texture than the Schuyler, but both are extremely flexible and feel wonderful to hold.

Both editions also feature gilded page edges combined with color. The Cambridge features red and gold page edges, and the Schuyler features blue and gold (other color options are available from Schuyler). Overall, I prefer the Cambridge style of gilding. It is smooth and highly reflective. The Schuyler is far less smooth and more muted in appearance:

The image above also shows another quirk of the Schuyler edition: the spine is thicker than the opposite edge. If you plan on stacking this Bible with other editions, it may be best to place it on top of the stack to prevent the stack from tilting. Other bibles on my shelf have a similar construction, but this Schuyler edition has a more pronounced difference in thickness than most others I own.

Overall, for external fit and finish and overall feel, I prefer the Cambridge edition to the new Schuyler Quentel. The mirror-polished gilding on the Cambridge is extremely well-done, and the binding feels a bit tighter without the slightest hint of imperfections. The Schuyler edition shows some minor page wrinkles near the gutter, and the feel of opening and closing the Bible is not as “solid” as the Cambridge. Overall this is a minor difference, and I think it will vary a lot based on personal taste.

Where the Schuyler edition shines is the typesetting, paper quality, and overall layout. This bible is an exceptional reader’s edition. The text is incredibly clear and easy to read. The line spacing is very well designed. The entire page is balanced and easy on the eyes. I also enjoy that the verse numbers are minimized and the chapter numbers are not overbearing. If you need to look up a verse the numbers are there, but if you want to read extended sections of the Bible, the numbers do not get in the way.

Schuyler reports that the font size is 10 pt. In practice, this font is just as easy to read (if not easier) than the 12 pt font in the Oxford Large Print NABRE, which is significantly less bold. Here is a side-by-side comparsion:

The text is line-matched, meaning that the lines of text on each side of a page are aligned to minimize ghosting of text during reading. I’ve noticed that subsequent pages are not always perfectly aligned with the current page, resulting in minor ghosting. This is noticeable on some pages more than others. Overall, it doesn’t impact reading at all, but there are much cheaper Bibles that are more consistent in line-matching between pages.

The text is also significantly larger than the Cambridge Reference NRSV, and the page layout feels less “busy”, with the cross-references at the bottom of the page instead of the middle column:

The Apocrypha/deuterocanonical books are printed at the back of the Bible (after the book of Revelation). There is no difference in font size or typesetting for the books in the Apocrypha. There is a full complement of cross-references and textual notes for the Apocrypha, similar to the rest of the Bible. Here is a sample from the first two pages of Sirach (otherwise known as Ecclesiasticus or Ben Sira):

As a final note, this Bible is very comfortable to hold, but its size often requires using two hands while reading the outer columns of text. The Cambridge Reference NRSV is similar due to its wide pages. Somehow, I find the Schuyler RSV easier (or more enjoyable) to hold while reading than the Cambridge. Even though the Schuyler is longer and just as wide, it doesn’t feel overly large to me. On the other hand, the Cambridge feels “too wide” when I’m reading. The following photo shows how the pages curve downward when I hold the Schuyler RSV in one hand:

Overall, this Bible lives up to Schuyler’s reputation for top-notch premium bibles. The goatskin cover is beautiful and flexible with a fine grain. The sewn binding and three high-quality ribbon markers are standard features for premium bibles. The best part of this Bible, where it distinguishes itself from most others on the market, is the page layout. It is excellent. The only other Bible in the same league for page layout and print quality is the Great Adventure Catholic Bible from Ascension Press. But for a pure reader’s bible with minimal distractions, this edition from Schuyler excels.