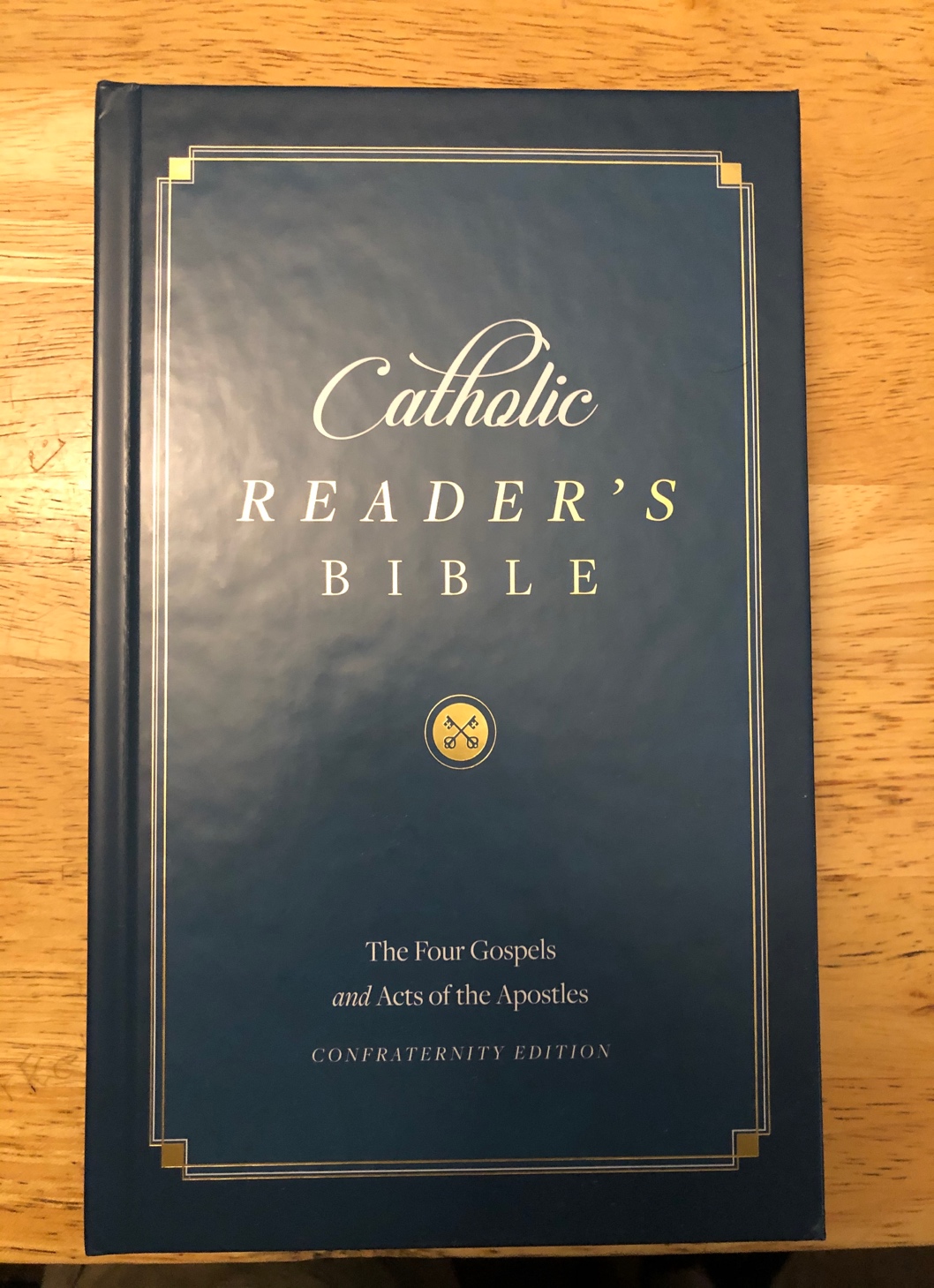 Many thanks to a reader for sharing this review!

Sophia Institute Press has published a two-volume edition of the Confraternity New Testament. It was originally published in a single volume, single column edition in 1941, when the Episcopal Committee of the Confraternity of Christian Doctrine (US) made available a revision of the Rheims-Challoner New Testament. The revision was completed by members of the Catholic Biblical Association of America, based on the Latin Vulgate.

The current Sophia Institute Press edition is also a single column edition. The new edition retains much of the original 1941 version. There are no updates to this text provided, yet the great difference is that the Sophia volumes comprise a Reader’s Edition. This two-volume New Testament set is without chapter or verse numbers, nor does it contain any notes whatsoever. Such an edition is a first for a Confraternity text.

Currently offered is a hardcover edition, with no book cover, but a blue glossy covering. After a short period of use, I’ve not seen fingerprints appear as would usually do so on a glossy covering. Smudged scratches were somewhat evident, perhaps from shipping. On the front is a script font “Catholic”, below it reads: “Reader’s Bible”. Underneath this section of the title, on both volumes is an icon of two keys crossed. This is seen on ecclesiastical heraldry representing the Keys of Heaven or the Keys of the Office of St Peter. Below is the individual volume’s section of the New Testament. The first reads: “The Four Gospels and Acts of the Apostles”; the second reads: “The Epistles and Revelation”. Below each individual volume’s title reads: “Confraternity Edition”. Surrounding all this is a three lined border with a gold box in each corner. The border consists of a gold, then white, then gold border.

On the spine it reads (on both volumes): “Catholic Reader’s Bible”; and at the bottom, Sophia. In the middle, the first volume reads: “The Four Gospels and Acts of the Apostles”; and the second volume reads: “The Epistles and Revelation”. On the back cover, each volume reads: Sophia Institute Press, then www.SophiaInstitute.com. On the lower right is the volume’s ISBN, the ISBN scan code and price for each volume ($24.95 retail).

Inside each volume are white endpapers. Next are two title pages. The first reads “Catholic Reader’s Bible” and which each volume’s subtitle (NT books) is included. The second lists the same, with a larger font. At the bottom on the second title page is Sophia Institute Press, Manchester, New Hampshire. On each volume’s title pages, there are two diamond shapes below “Catholic Reader’s Bible”. One would think the first volume would have one diamond, and the second would have two. This is not the case.

On the imprint page information is offered for the hardcover edition. The Nihil Obstat (“nothing stands in the way” or “nothing hinders”) and Imprimatur (“let it be printed”) are from the 1941 Confraternity New Testament. Nihil Obstat: Rt. Rev. Henry J. Grimmelsman, S.T.D., Rev. John F. McConnell, M.M., S.T.L., S.S.L., Rev. Joseph J. Tennant, S.T.D., S.S.L. Imprimatur: Most Rev. Thomas H. McLaughlin, S.T.D., Bishop of Paterson (NJ). On the Imprint of the 1941 edition, The Prayer to the Holy Spirit is included. Not so in these two volumes. Following is that this (1941) revision is edited by Catholic scholars under the patronage of the Episcopal Committee of the C.C.D., and the translation is from the Latin Vulgate.

The two current volumes are copyrighted in 2020 and printed in the USA. The address and contact information for Sophia Institute Press follows. Next are two ISBNs. This first is for the hardcover edition: Gospel/Acts 9781622828241; Epistles/Revelation 9781644133231. The next is for an eBook edition: Gospel/Acts 9781622828258; Epistles/Revelation 9781644133248. It appears that an eBook edition of each volume is forthcoming, but no information has been received from Sophia Institute Press as to a release date. No Library of Congress Control number is listed (this is a serially based system of numbering cataloging records in the Library of Congress, used since 1898). Both of the review copies are first printing. Though a paperback edition is listed on some Catholic and Christian retail websites, there is no ISBN noting such in either of the hardcover volumes.

In the identical tri-fold introductory sections, firstly, the Foreword is composed of sections of a talk offered by Most Rev. Amleto Giovanni Cicognani, Apostolic Delegate to the United States, at the Seventh National Congress of the C.C.D. in Philadelphia, on 16 November 1941. Cicognani would remain in this position until 1958, when he was named Cardinal by Pope St. John XXIII. An exception had to be made, as his brother was already a cardinal, and Church law had prohibited brothers as cardinals simultaneously. Later he became Cardinal Secretary of State and in 1972 was elected as Dean of the College of Cardinals, which he served as until his death in 1973.

The next section, “On Reading Scripture”, is from the encyclical of Pope Benedict XV, “Spiritus Paraclitus” (15 September 1920). This marked the 1,500th anniversary of the death of St. Jerome. In this, Pope Benedict XV promulgated norms and guidelines for exegetes. The document is viewed by many contemporary Scripture scholars with less than an idyllic reception. This section is composed of part of the opening paragraph of the Encyclical, and parts of paragraphs 43, 47, 58, 63, 68 and 69. Concluding this section is a reminder that Pope Leo XIII granted an indulgence of 300 days to those of the faithful who would read, for at least a quarter of an hour, from Sacred Scripture with reverence and as spiritual reading. An apt minimal hope for each of us.

The final section in the introductory is the Preface. This was included (as was the previous section) in the original 1941 Confraternity New Testament. It tells of the place of Scripture in the Church, the history of the Rheims-Douay edition, the Challoner revision, and how the English text was updated to meet the modern (at the time) English idiom.

This concludes the introduction to each hardcover volume.

The size of the Gospel/Acts edition is 5.75” x 8.75” x 1.25” and the size of the Epistles/Revelation edition is 5.75” x 8.75” x 1.06”. In both volumes, much is the same, and if you’re familiar with the Confraternity New Testament, you’re aware of the translation, its place within biblical scholarship in the US, the lack of a complete Confraternity Bible due to implementation of standards in accord with “Divino afflante Spiritu”. At the beginning of each Gospel, Epistle, and both Acts and Revelation, a brief “A note about …” section serves as an introduction, and each of these pages has a grey hue. I’ve not included a photo of the side of the book, as it is difficult to show, but you will see a thin grey line, and this is the closest to a visual “tab” on the side of the outside pages.

As this is a Reader’s edition, no chapter or verse numbers are noted, only at the top middle of each page, the book, chapter and verses are noted, in line with the section included on the page.

Within each book, major sections are noted. An example from the Gospel of John: (pg. 211) Prologue; (p. 212) I. The Public Ministry of Jesus; (p. 248) II. The Passion, Death and Resurrection. The extensive section markers within the 1941 Confraternity NT is done away with in favor of only major subject headings. Questionable lines or sections, such as Matthew 23:14, are marked within brackets with no notes. There is no indentation of passages from the Old Testament, or poetic OT quotes, as the 1941 Confraternity NT had done.

There is line matching, which appears to be done very well. Also, there is some light ghosting where lines on the postceding page exceed the line on the page viewed. The font size is approximately 6.5-7 point (I apologize for any error in this calculation. No font size is listed with the volumes). The books will, as is standard with glued bindings, not lie perfectly flat, but after a bit of use, will “do their best” to lie somewhat flat. No ribbons are included with either volume. The first volume is 346 pages; and the second volume is 301 pages. Thus, the complete NT is 647 pages. Page numbers are specific to the individual volume, and do not run from the first volume into the second volume.

The final page in each volume is typical of a Sophia Institute Press book. A single page offers a brief background and work of Sophia Institute Press and URLs for varied aspects of its work. In regard to these volumes, a key part of Sophia’s mission is worth mentioning: “Sophia Institute is a nonprofit institution that seeks to nurture the spiritual, moral, and cultural life of souls and to spread the Gospel of Christ in conformity with the authentic teachings of the Roman Catholic Church.”

I have queried Sophia Institute Press as to whether there will be a forthcoming Old Testament published in the same Reader’s Edition format, or whether there will be quality editions (leather, e.g.). At the time of the completion of this review, no reply has been received. If further information is made available, I shall forward it accordingly.

Outside the realm of a review is the question, “Why has Sophia Institute Press published a Confraternity New Testament Reader’s Edition?” From its web page, it states that this is designed as a devotional reading text. As “the early Christians read the inspired Word of God with…academic distractions….Now,..you finally can too.” A point understood in its intent, but I don’t know of first century Christians who carried a copy of the Scriptures in their tunic. Nonetheless, the intention is to read the biblical text, unhindered, in a devotional manner. Yet, the question of “Why the Confraternity Edition?”. Sophia Institute Press continues that the revision to the Challoner revision of the Rheims New Testament “…employs language that is more intelligible and familiar today….” The purpose of this edition “…is…for those of us who open our Bibles not as scholars but as seekers yearning to come to know and to love God.” One might question the use of the Confraternity text, but the aim is apparent: a New Testament meant for people who desire to read the biblical text, unhindered by notes and commentary, to become deeply engaged with it, and come into a deeper relationship with God.