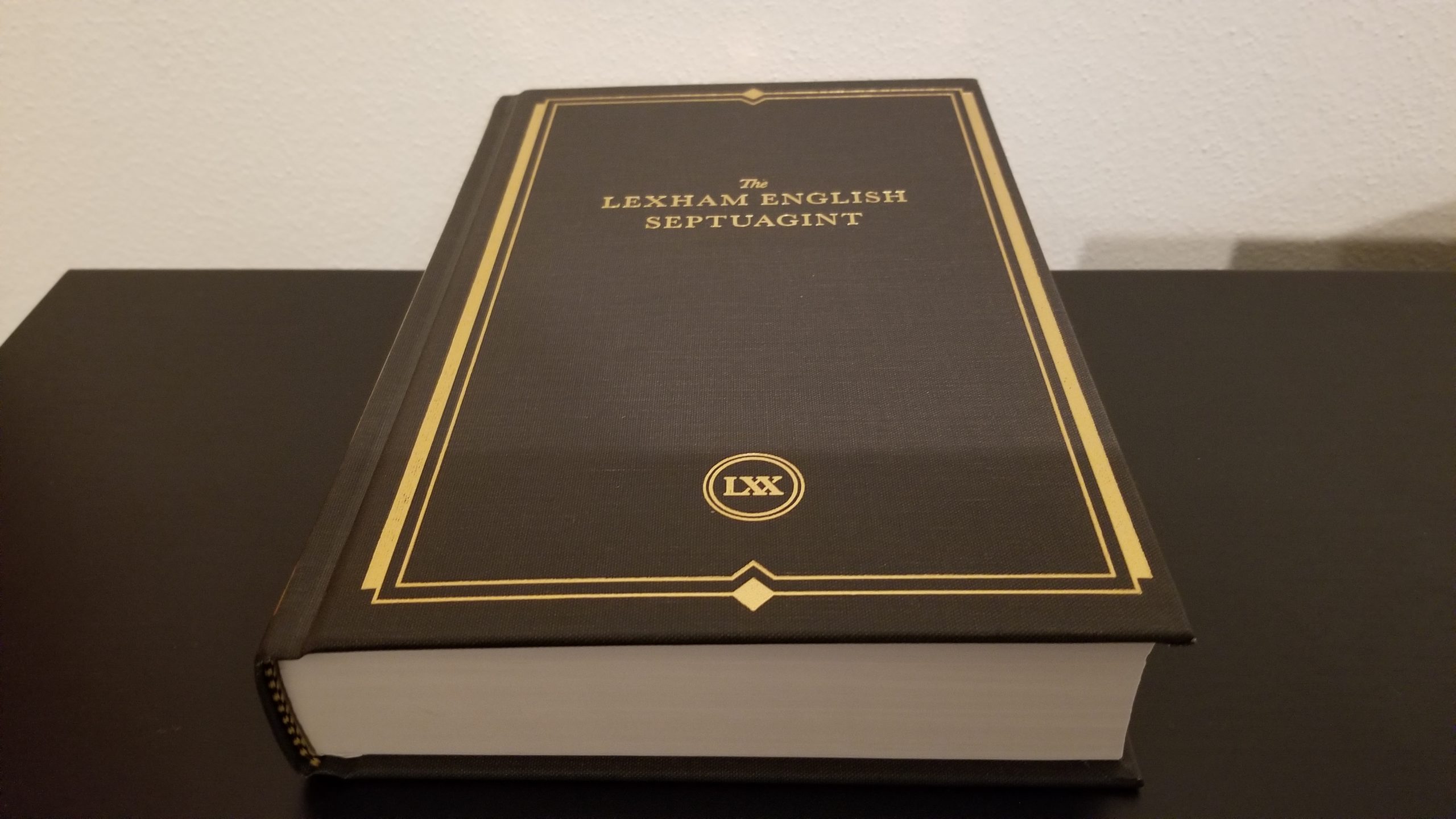 Back in mid-January, I posted about the brand new publication of the Lexham English Septuagint, (LES) second edition. As mentioned in that post, Lexham Press is the publishing imprint of Faithlife Corporation, which produces the well-known Logos Bible Software. This English translation of the Septuagint (essentially, the Greek Old Testament, which was used widely by the early church) grew out of an interlinear Greek/English edition that was available in Logos. The highly literal interlinear English text was rearranged into semi-readable form by software, and then it was comprehensively edited by a team of scholars under the direction of Dr. Ken Penner of St. Francis Xavier University in Canada. The first edition of the resulting translation was available only in Logos software. The text was revised again for this second edition, and it is being printed in physical form for the first time. Many thanks to Lexham Press for providing me a copy to review!

The book measures 6.25 X 9.25 X 1.5 inches. This is very similar in size to the New Living Translation – Catholic Edition (NLT-CE) which was published by Tyndale in the US in 2018:

I’m pleasantly surprised at the manageable size of this book. The marketing images that were released by Lexham Press made me think it would be thicker, but the thickness is certainly nothing to worry about in person. This is a book that can be read in-hand for a decent time without fatigue.

The opening pages contain a very informative introduction, which explains the translation philosophy and differentiates this translation from others in recent history, notably the New English Translation of the Septuagint (NETS). One of the most important differences between them is that the NETS translates the critical text of the Septuagint, which is a scholarly reconstruction of what the original translators of the Septuagint (from Hebrew to Greek) wrote, while the Lexham English Septuagint translates H. B. Swete’s diplomatic text of the Septuagint. A diplomatic text reproduces a single manuscript of the original, with supplemental material only used where the primary manuscript is missing material. Swete’s Septuagint is primarily drawn from Codex Vaticanus which dates to the 4th century AD. Diplomatic texts are closer to what Christians in the early church would have read, while the critical text is a theoretical reconstruction of an original that did not exist for the early church.

The translators also tried to preserve some of the flavor of the original Greek in their translation. They did not smooth out awkward grammar or make the text read better in English than it does in Greek. I admire this commitment to bringing English readers close to what the Greek is like. It does make for difficult reading in some places, though, where the meaning is hard to understand, or where familiar passages from other translations sound strange and foreign. Consider the following passage from Psalm 139 (Psalm 138 in the Septuagint numbering):

My bones were not hidden from you,
which you made in secret,
and my actual being
was in the lower parts of the earth.
Your eyes saw my unformed shape,
and in your document all will be written,
for days they will be formed,
and none in them.
But for me your friends were exceedingly honored, O God;
their rulers were exceedingly strengthened.
I will count them,
and they will be multiplied beyond the sand.
I was awakened,
and still I am with you.

The book features a very nice textured hardcover with gold designs and lettering. The pages are not gilded, and the binding is glued, not sewn. The text is line-matched, so ghosting of text from subsequent pages is not overly distracting. The text is also printed in single-column format, making the poetry sections especially enjoyable to read.

In the narrative sections, the text looks tightly packed to me, but when I compare it to other bibles, I realize that the LES features more comfortable line-spacing. The text is also notably larger than the 8-point font in my Cambridge REB with Apocrypha. Here is a photo of the two side-by-side:

Overall, this is a beautifully typeset edition with a nicely designed cover. At a list price of $39.99, I would prefer to see a sewn binding, but aside from that, this is a useful reference for anyone who is interested in the Septuagint. It retains common names for the books and people of the Old Testament, rather than reverting to the names from the Greek (for example, it uses 1 and 2 Chronicles instead of the books of Paralipomenon). This makes the LES much more approachable to modern readers who are familiar with translations of the Hebrew Bible as compared with the New English Translation of the Septuagint.