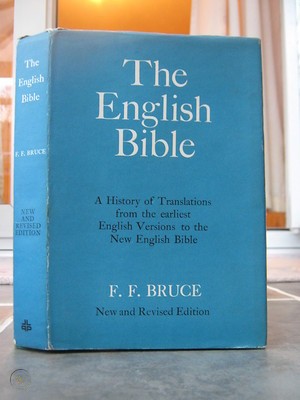 Someone who isn’t a reader of this blog actually read On Englishing the Bible?!

It would be years before our precious little grey Baronius paperback, but F.F. Bruce read On Englishing the Bible, which he called a “valuable little book…in which he brought together eight articles and lectures dealing with his experience as a bible translator. This book is a most useful handbook to his translation, as it sets forth clearly the principles on which he worked.”

Speaking for myself, these essays thoroughly converted me to the idea that dynamic equivalence is a respectable method of translation, even in the inspired text. Anyone else who feels the same about this wonderful little book? (Or the opposite?)

In earlier comments on the sometimes highly Latinate idiom and vocabulary of the Douay-Rheims, Bruce sympathetically references Knox’s argument that had the English Reformation swung the other way, it would have been the rhythms and cadences of the D-R that influenced our language, and not that of the King James.

Still Bruce is not entirely convinced of the argument, lightly pointing out that “even among Roman Catholics [reading the Douay Rheims] has never been the household work that the AV has been among Protestants.” In this small digression Bruce shows himself to be gentle and thoughtful. He points out that while both idiom and vocabulary of the D-R are Latin, the KJV has a Hebrew idiom but a thoroughly English vocabulary. He also mentions several stock phrases of KJV “Bible English” that never made it into mainstream English (“it came to pass”, for example) and were thus revised out of the KJV-AV-RSV stream of translations. “Where the might-have-been’s of history are concerned, it is easier to ask interesting questions than to return confident answers.”

He quotes from On Englishing the Bible again later on the subject of the massive pruning of the Douay Rheims footnotes by Challoner in his 18th century revision, Bruce quotes Knox’s wry remark “The glory has departed”. Funnily enough, Bruce is more accepting and interested in the D-R’s infamously combative footnotes than the Catholics I’ve read on the subject!

On Thou and You

There is a very interesting digression on the topic of second person pronouns in Bruce’s analysis of the RSV. While he only mentions offhand that Knox used thee and thou for all second person uses, and not just for addressing the deity, it is very interesting to me to see how a man of Bruce’s stature viewed the debate at a time when the RSV and NEB were still sometimes criticized for abandoning those traditional pronouns in some cases. “In any case,” he writes, “it is so difficult to be entirely consistent that there is much to be said in favour of retaining “thou” throughout where one person is being addressed (as Knox does), or else using “you” indiscriminately for the second person, both singular and plural, no matter who is being spoken to.”

I would imagine this section was written for the 1961 first edition and was carried over, though I have no proof of that without consulting the first edition. Reading Bruce’s words, I am struck by how the educated men of his generation must have been rather shocked by the complete and sudden collapse of traditions in language and otherwise as the youth culture of baby-boomers and the apotheosis of consumerist capitalism remade the developed world. He writes here as if he thinks that the RSV and NEB had introduced a new consensus, one which he saw as uneasy and built on very little. Just a few years after those words were printed, they must have seen as quaint. A third edition of this book was published in 1978, by which time the English speaking Catholic Church had moved completely to “you” in singular and plural, divine and human contexts in its biblical and liturgical translations. Knox’s comments from the late 40s that he would have preferred to do away with thee’s and thou’s completely seems comparatively prescient, though he felt unable to follow this instinct to its conclusion. (Years later, the priest Cormac Burke would do the work for him and post it online, but his “You-version” of the Knox is understandably suppressed now that the canonical Knox is back in print.)

Adventures in Translating a Translation

“The New Testament [of the Knox] version appeared in 1945, with the authorization of the Roman Catholic Archbishops and Bishops of England and Wales. The Old Testament appeared in 1949, in two volumes; according to the title-page it was “newly translated from the Latin Vulgate by Mgr Ronald A. Knox at the request of the Cardinal Archbishop of Westminster: for private use only”. After some revision, however, the Old Testament version too received hierarchical authorization.”

Bruce notes that Knox’s work is explicitly a translation of, not just the Vulgate, but the Clementine Vulgate, the edition of the Vulgate authorized by Clement VIII in the 16th century. Knox, unlike the Americans working on the Confraternity New Testament a few years earlier, sought to translate the Clementine Vulgate tenaciously, even in cases where his source was obscure or corrupt and the meaning of a passage could be more clearly seen in earlier editions of Jerome’s work.

A fascinating example of this at work is Acts 17:6, where some Jews resisting Paul’s preaching in Thessalonica describe the Apostle and his followers as men who have “turned the world upside down.” Bruce writes that originally the “Vulgate very properly has orbem for “world”. But at a latter stage of transmission of the text orbem was corrupted to urbem, “city”; and urbem is the reading in the Clementine Vulgate. What is a conscientious translator to do? The Confraternity revisers, very properly, ignored the corruption and translated “these men who are setting the world in an uproar”. But Knox stuck to the Clementine text and rendered “the men who are turning the state upside down”; to be sure, “state” could be a compromise, as the English reader might well take it to refer to the Roman Empire (which is what “world” means here) rather than to the city of Thessalonica.” He also quotes Knox’s explanation of this translation from On Englishing the Bible in which the witty Monsignor writes that “it is no part of the translator’s business to alter, on however good grounds, his original.” This does not very much impress Bruce, who makes the comment that the translator “is doing no good service to his original when he declines to correct a palpable misprint or copyist’s error.”

Bruce also questions Knox’s inclusion of the Johannine Comma (“Thus we have a threefold warrant in heaven, the Father, the Word, and the Holy Ghost, three who are yet one”) and his defense in the footnote that the Vulgate may be in fact preserving the original text, though the best Greek manuscripts lack it.

Bruce seems to mourn here that Knox is working on translating the Vulgate, a mere translation, and not the sacred texts themselves. “Not that any blame attaches to him in this regard; this was the task which he was commissioned to carry out. In fact, time and again our admiration is excited by the skill with which he surmounts these limitations.” One cannot help but think of how in Acts 17:6 and elsewhere, Knox is able to translate the Clementine Vulgate as he has it, while also pointing us toward the meaning in Hebrew or Greek, distant though it may be. “The result,” Bruce writes, “is that no one will go to his version for help in determining the precise sense of the original.”