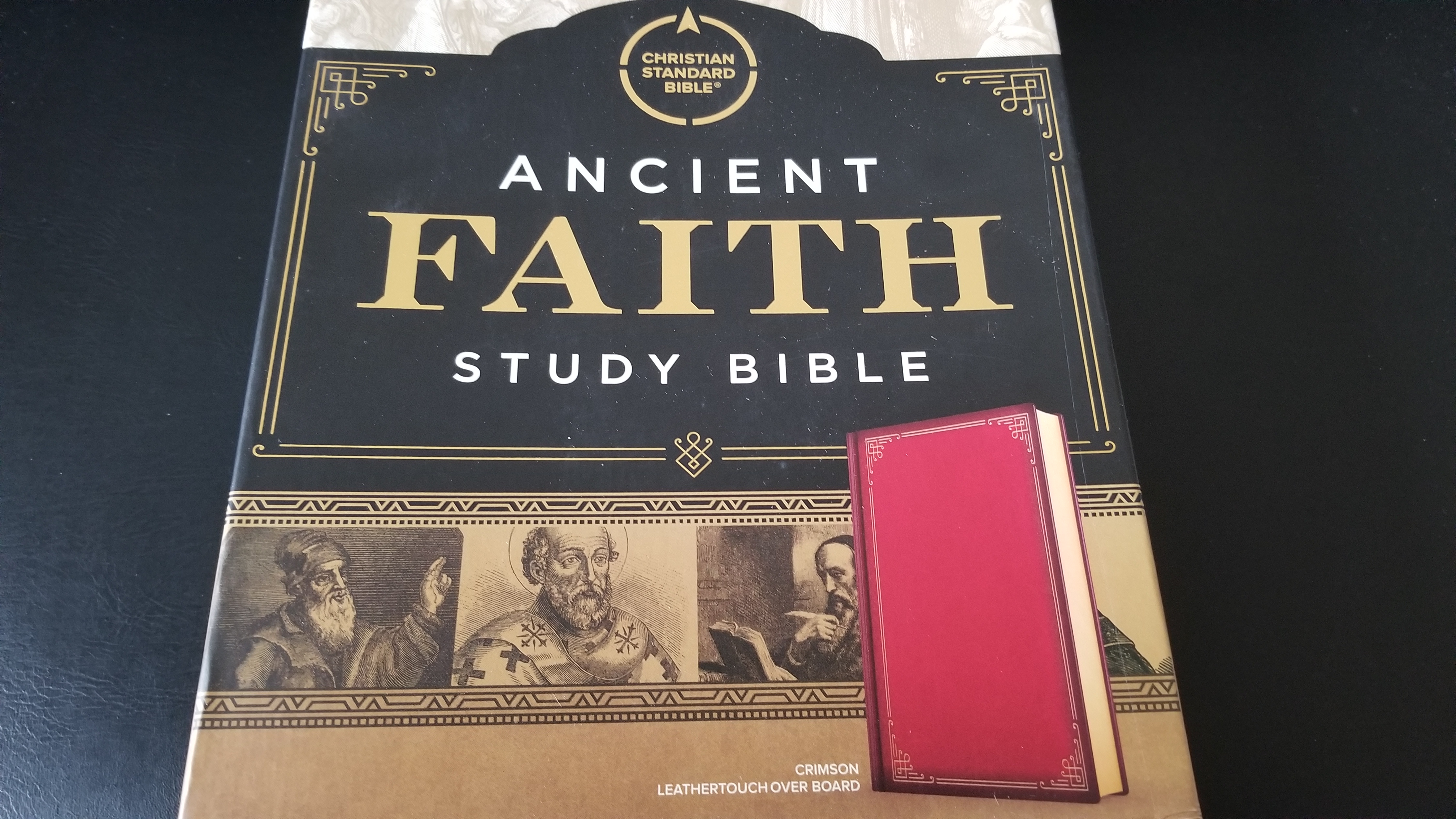 I’ve now had a chance to read through the Gospel of John and all the accompanying study notes and articles in the Ancient Faith Study Bible (check out the first look if you’d like to know more about the physical construction of this bible). Overall, this bible is an amazing resource, and I have found nothing that would dissuade me from recommending it. I thoroughly enjoyed reading the commentary from the early church fathers as a welcome change of pace from the more sterile, clinical, historical-critical notes in modern study bibles. The selections from the fathers are unabashedly philosophical, spiritual, and theological, and many of them provide deep insights that anyone can reflect on for their own spiritual life. Consider the following reflection from Ephrem the Syrian on Jesus’ conversation with the Samaritan woman in John 4:7-15:

Our Lord came to the spring of water like a hunter. He asked for water in order to give water, with water as a pretext. He sought something to drink, like a thirsty person, so that the way could be opened for him to quench thirst. He asked from her in order to teach her, and she in turn would ask from him. He was not ashamed as a rich person to ask like one in need, to teach poverty how to make a petition. He was not afraid of reproach because he as speaking to a woman by herself, in order to teach me that whoever keeps to the truth will not be shaken. “[The disciples who soon arrived] were indeed amazed that he was standing and talking with a woman” [v.27]. He had dismissed his disciples from his presence so that they would not chase his prey away. He had cast bait for the dove so that by means of her he might capture the entire flock. He asked her in a way that was opposite to the real situation, so that she could answer honestly. “Give me water to drink” [v.10]. Here was the beginning of the meeting. He asked for water, and he made a promise about living water. He made a request, and he ceased from his request, even as she also left her pitcher. He ceased pretexts because she came to the truth, for the sake of which the pretexts [had arisen].

Or consider this reflection from Augustine on John 8:36 (“So if the Son sets you free, you really will be free”):

The first stage of freedom, then, is to abstain from sins…such as murder, adultery, any sexual sins, theft, fraud, sacrilege, and others of that sort. When someone has started getting free from these (and every Christian ought to be so), he begins to raise his head toward freedom. But that is freedom begun, not completed. Why, says someone, is it not completed freedom? Because “I see another law in my members warring against the law of my mind” [Rm 7:23]; “for what I want to do,” [Paul] says, “that I do not do; but what I hate, that I do” [Rm 7:19]. “The flesh,” he says, “lusts against the spirit and the spirit against the flesh, so that you do not do the things that you want” [Gl 5:17]. There is partial freedom and partial bondage. This freedom is not yet complete, pure or full freedom because it is not yet in eternity. For we are still partially weak and thus only partially free….If there were no weakness left, then that would mean that we should be living here without sin. Yet who would venture to say such a thing except someone who is proud but also unworthy of the Deliverer’s mercy? This is the kind of person who wants to be self-deceived and who is destitute of the truth. And so, from the fact that some weakness remains, I venture to say that in whatever measure we serve God, we are free. In whatever measure we serve the law of sin, we are still in bondage. And so too the Apostle says what we began to say: “I delight in the law of God after the inward person” [Rm 7:22]. Here it is then. Freedom occurs when we delight in the law of God, for freedom gives you joy. As long as you do what is right out or fear, you find no delight in God. Find your delight in him, and you are free. Do not fear punishment; rather, love righteousness.

These two quotes are shimmering examples of the wisdom and reflection that jumps off the page in these study notes. It’s also quite impressive that the publishers were able to fit such extended commentaries into study notes at the bottom of each page. The smaller font makes the notes look deceptively short. Even so, I often found myself wishing that I could read more than the selections in the notes.

Since many passages in the Gospel of John strongly teach the divinity of Jesus, many of the reflections from the church fathers are centered on understanding and explaining the Trinity. I enjoyed peering through the historical window to see how the ancient writers explained and defended the Trinity in light of the turmoil and wrangling about the nature of God. There are also multiple insets that delve into greater depth on some of the specific debates of the early church. In the first chapter of John, there is a “Twisted Truth” inset that discusses Apollinaris (who lived around 310-390 AD), and his view that Jesus could not have been fully human. The inset explains how John’s prologue should not be misread to support Apollinaris’ view of Jesus. There is also an excellent full-page article on the eternal generation of the Son. The article features an extended selection from Gregory of Nazianzus, where he argues why it is correct to say that Jesus is “begotten” by the Father.

I paid close attention when I reached the sixth chapter of John (the Bread of Life Discourse) to see how the notes would handle the Eucharist. There are only two relevant notes. In one case, Cyril of Alexandria assumes as a matter of established fact that Jesus is talking about the Eucharist when he speaks of eating his flesh and drinking his blood. Tertullian offers a more spiritual reflection:

If [Christ] says that “the flesh profits nothing,” then the meaning must take direction from the context of that remark. For seeing that they regarded his speech as hard and unbearable, as though he had really prescribed his flesh for them to eat [vv. 54-58], since his purpose was to assign the establishment of salvation to the Spirit, he first said, “It is the Spirit that gives life,” and only then added, “the flesh profits nothing” —toward the giving of life, of course. He also proceeds to state how he wishes “the Spirit” to be understood. “The words that I have spoken to you are spirit and life.”…And so, when establishing his teaching as the Life-giver (because the Word is spirit and life), he also said that it is his flesh, because the Word also was made flesh [see Jn 1:14]. We ought therefore to desire him in order that we may have life. We ought to devour him with the ear and to ruminate on him with the mind and to digest him by faith.

Tertullian: On the Resurrection of the Flesh 37 — Ancient Faith Study Bible

On the whole, incorporating both of these approaches in the notes is fine in my book. I think Tertullian’s reflection offers useful depth as long as it does not remain in isolation from the sacramental reality, which Cyril of Alexandria covers in another note.

Finally, I ran into a note on John 5:29 by Gregory of Nazianzus, where he clearly teaches a view of salvation that depends on works as well as faith:

Those who have done good shall go into the resurrection of life, now hidden in Christ and to be manifested hereafter with him. And those who have done evil shall go into the resurrection of judgment to which those who have not believed have been condemned already by the word, which judges them. Some will be welcomed by the unspeakable light and the vision of the holy and royal Trinity, which now shines on them with greater brilliancy and purity and unites itself wholly to the whole soul….The others…must endure the being outcast from God and the shame of conscience which has no limit.

Incidentally, there are no notes at all on the famous passage in Ephesians 2:8-9, where Paul says “For you are saved by grace through faith, and this is not from yourselves; it is God’s gift—not from works so that no one can boast.” (CSB)

As a final note, I found that the information pages and insets are very friendly to Catholicism. There is a biography of Athanasius which unabashedly states that Athanasius was a bishop, and that he fled to Pope Julius I in Rome during one of his exiles. If the publishers had a mind to downplay the hierarchy of the early church, they could have called Athanasius an “overseer.” The biography of Jerome also states that he was ordained a priest. Again, the publisher could have easily said that he was “presbyter” to avoid the connection with modern Catholic priests.

Overall, I am greatly enjoying this bible, and I think it could be a great resource for many Catholics, even though it lacks the deuterocanonical books. The incredible wealth of notes from the church fathers provide useful spiritual insights and a welcome theological view of Scripture. I’ll touch on the CSB translation in part 2.

11 thoughts on “A Few Days with the Ancient Faith Study Bible (CSB): Part 1”